In an earlier post, I waxed lyrical about Secret Cinema: Moulin Rouge.

So good, I went three times. Now the show is over, here’s some secrets…

Watching the film was absolutely stunning – because you weren’t an audience, you were in the film, watching Moulin Rouge in a set of the Moulin Rouge, with some astounding dancers synching the action on screen in stage.  My first viewing was pure emotion, sitting on the balcony in the mid-range seats with my wife singing love songs to each other and basically crying the entire film through.  Viewing two was a bit baser, in the pit with the Creatures of the Underworld and a pretty good idea of where to be when. If you were in the right place when Satine was going to descend from the ceiling, you’d be touching her hand as she was swung around on the trapeze. Then if your timing was perfect, five minutes later you might be in the right place to be ordered to “Lie down” by an acrobat, surprised to see Satine behind him when he moved right, and even more surprised to find her sitting on your chest and singing two seconds later. Thought that was a plant first time round – nope. Every single number in the Moulin Rouge – especially “Entertain us”, but really every one – was pure animal magic. Especially right up the front, especially when the dancer you were in front of was one you’d met earlier. Visit three was being in the right place at the right time to get into the dancefloor first and throw fistfuls of fake francs at Diamond Dogs dancing to music I am three decades too old to recognise.

That’s worth reiterating. The character crew were ace, most of them looked *exactly like* the characters: Harry, Toulouse Latrec, the Duke, and Satie in particular. In fact, Satie was key to the film viewing. Dragging people to their feet and to sing by force of will. He made it. But. But. But by god the dancers were astonishing. The Diamond Dogs were great, they exuded control and demanded worship. Once the first couple of numbers had been and gone, though – there was only one dance I wanted to see. Not the tango, though that was drama itself, but “Like A Virgin” – and they did not disappoint. Not in iota. From the first time I saw the film, that’s what I wanted to see live and there it was. Amazing.

But you know, I am a larper at heart and however good the entertainment provided is, what I want is things I’ve made happen.

In Montmatre, you were free to wander about, portraying – to a greater or lesser extent – a character who might have been found there and interacting with others. These were chosen by some magic algorithm, I think. Certainly, you’d register at a website where one would be given you, and by using a different email address, you’d get a different suggestion. Most of the characters were taken from actual historical figures – someone had been hard at work on Wikipedia – and had suggested relationships with other characters. Most of those were attendees, one or two were crew.

This model character “creation” was the big weakness of the set-up – the characters didn’t really work unless everyone got into it, and given you had no choice without a small cheat – you weren’t all that likely to get one you really wanted. They could learn some lessons from lrp on that, I reckon. I don’t believe I ever met anyone who was one of my character’s relationships, although to be honest I didn’t really try.

Much more interesting to me was the structure of the interactions and how you could hustle up some attention…  I am sure I oversimplify here, but…

There were three explicit layers of tickets: Aristocrats, Children and Creatures. From all the characters I saw, these had three roles to fulfill in the interactive element: consumers, intermediaries and workers. The Creatures had a service to provide, the Aristos wished to consume those services, and the Children – and crew characters – put Creatures and Aristos together. I met a fair few Aristos who wanted to watch, I met a lot of Creatures who wished to perform when asked to – but not many Children, not many intermediaries. Crew were really good at helping folk get to meet the right people, but they had other things to do too. The marvellous Marquise de Mornay was fabulously helpful. The Immortal Sarah Bernhardt still owes my third character a grand for a pre-paid performance we never managed, but I will generously forgive her – if only for her glorious prima donna strop in response to finding I’d recast Juliet on my second run. However they didn’t really have enough time to do so in between their actual performance roles – so that interactivity wasn’t as common as it might have been.

Unless, of course, you were an intermediary. Then you had an easily identified market – Aristos stood out – and an easily identified source of product – the place was crawling with potential performers. The only thing that was tricky was a place to perform, and here the crew were really helpful.  By sheer serendipity – I’d been given an “Impressario” as my first character – I’d been given permission to do something pretty simple. Put product in front of market. That first run, I took along some “performance poetry” – plagiarised boy-band lyrics – and some “contracts to join the company” and myself and confederates signed folk up once we’d got them performing. Sadly, the Duke refused to sign anything – but I guess on paper the “Faust Communal Association” revolutionary bohemian theatrical company own the Moulin Rouge, on account of some favourable small print and Harry Zidler’s actual and very own signature.

(Although that first time – my wife Manda totally won the interactive – she was allocated a “satirical cartoonist” character, and was actually sketching performers while they were performing, and selling her work to them…)

It was on the second run that brilliant things happened. The estimable Baines and Baker had shared a “script for a play” they’d created. One weekend’s camping and chatting later, and I’d structured another couple with some friends following the Bryony/Baker model. Basically, we made a list of famous love stories, ripped them into the important bits and thought up bits of song lyric to use. So Romeo’s faked death became a chunk of Tubthumping, and so on… 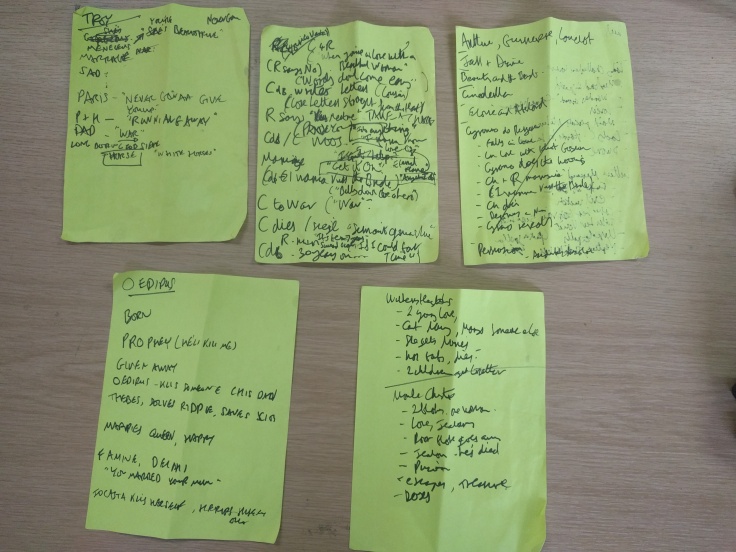 Now, *that* was gold. Four performances, of three different plays, with four different casts, none of whom I had ever met before, to any number of audience shouting, cheering and some of whom were simply crying with laughter at some of the songs fragments. Particularly when they realised that Romeo’s wooing of Juliet was taken from this:

The full scripts are here, fwiw: On Google Docs

So it’s a funny old world.

Anyway – I thought it was bloody awesome. Ends.

PS. Thanks to Ragnar, who suggested I go for artist’s tickets on the grounds that I’d “not stopped hustling.” Cheers.

2 thoughts on “…and be loved in return.”