I’ve played Death Unto Darkness a couple of times: loved it and hated it, then recently I crewed it and it’s really strong now. Friend of mine lost a character last event, and said some stuff I thought worth remembering. 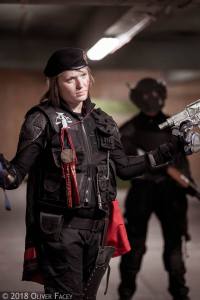 “I’ve been given feelings all over again by the last batch of photos from DuD E4. Sorry to harp on about this, but this affected me.

I feel really good. I miss the character, obviously, but only in a “great endings always leave you wanting more” way. I’m satisfied. I’m looking at the pictures and remembering the narrative all over again, and it’s great. It’s a good memory.

I’m looking back on it and seeing how it can improve my plan in future:

– When Vox was first in play, she was a Generic McGenericy Arbiter who shouted a lot and fought things. It took a couple player events (notably, Casino Imperiale [I’m sorry Wrenna/Oliver I am never going to remember the real name of your player event even if you tell it to me I will just hear ‘Casino Imperiale’ again]) for her to bed in and actually become a character at all. I was dissatisfied with her after the first player event and a little convinced I had made a mistake with her characterisation – but this proved not to be true. It just took time.
Therefore, to remember – Characters in campaign games take an event or two to bed in. Any new character will similarly do so.

– The only reason she became fun is because I put the effort in through letters and deciding to try to do wacky things during downtime. I’m often a bit conservative about actions out of uptime, but it really paid off. The letters in particular /really/ paid off.

Therefore, to remember – Use letters in downtime. Make ridiculous plans and then revel in failure.

– It’s perfectly alright, and kinda satisfying in a zen kind of way, to spend money on kit for a character at an event when you know you are going to die/stop being a PC at that event. (Then again, I also thought this for E3 – I have a long history of coming to events thinking “definitely going to die at this one”.

– 3 Mainline Events is still the most satisfying arc.

These pictures have put me in a really, really good state (if turning on my ‘pretentious thesp’ mode a little).

After over a decade larping, I am finally getting to the point where I am comfortable putting in a lot of effort off-game to have the best possible time with a character, during that character’s existence, whether in uptime or not.

There was a time when I actively resented the idea of putting off-game work into a game. I was very much of a “turn up and play” type of larper. I think this is a legitimate way to play, but it is no bad thing that putting in more of an effort to reach out to people, to make plans, to needle my enemies, meant I was able to have that satisfying arc.”